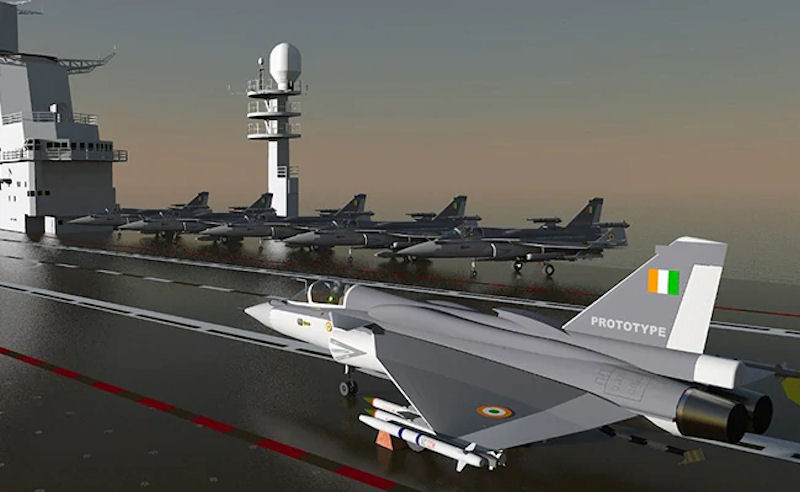 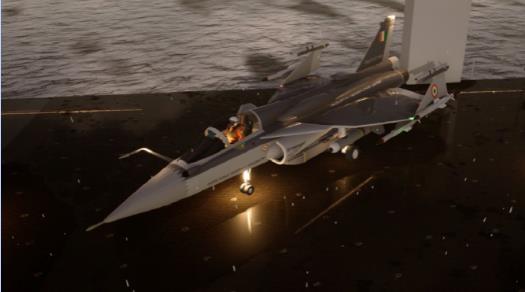 A new model of India’s under-development Twin Engine Deck Based Fighter TEDBF Fighter debuted at the 2021 Aero India show in Bengaluru. The medium-weight aircraft designed for the Indian Navy comes under the 4.5 generation multi-role category. It is being developed by the Aeronautical Development Agency controlled by the Defence Research & Development Organization (DRDO). The DRDO offered to develop a new twin-engine deck-based fighter aircraft for the Navy based on the experience of the Naval Light Combat Aircraft (LCA), which should be ready by 2026. The intent behind its creation is to fulfill the national Multi-Role Carrier Borne Fighter (MRCBF) requirement to augment and eventually replace the IN’s fleet of carrier-borne MiG-29K ‘Fulcrum’ fighters. The project will run alongside other programs of the Aeronautical Development Agency, such as the Medium Weight Fighter (MWF) and the Advanced Medium Combat Aircraft (AMCA) projects. It will also utilize developments from these other projects.

As its name suggests, the TEDBF concept features twin engines for better short take-off performance. This feature shall enable it to take off from the Indian Navy’s Short Take-off But Arrested Recovery (STOBAR) aircraft carriers, INS Vikramaditya and Indigenous Aircraft Carrier 1 (IAC 1) INS Vikrant. There are also multiple other advantages of a twin-engine design. Firstly, it will have increased speed and maneuverability. Moreover, the jet will have a better range because it can carry more fuel. After refueling, the range can be extended to well over 2000 km as well. It can also carry larger combat loads. The aircraft is also less vulnerable to mechanical failures or combat damage. Moreover, it would be much safer than a single-engine jet, as losing the latter over water or land is a much more life-threatening experience.

The most important highlight of the new design concept was the sharp-edged frontal fuselage. ADA is trying to bring a near stealth approach to the aircraft by optimizing the radome and the frontal fuselage. This is being done by revamping completely with sharp edges like AMCA and other 5th generation fighters. This change will highly reduce the frontal RCS of the fighter jet in their radars during an aerial confrontation with the enemy fighters or their force multipliers (AWACS). Some other specs aimed towards its maritime role include folding wingtips for easier stowage on and below deck and an arrestor hook.

Physically, the fighter has a wingspan of 11.2 m (7.6 m when folded for carrier stowage) and is 16.3 m in length. With canards located ahead of its wings, the TEDBF looks similar to the Dassault Rafale that the Indian Air Force operates. Canards are the small wing section mounted forward to the main delta wing towards the center of the fuselage. Their purpose is to provide stability, lift, and overall maneuverability to the aircraft. HAL’s performance specifications give the jet a maximum take-off weight of 26 tons, a maximum Mach number of 1.6; a service ceiling of 60,000 ft; and a g limit of +8/-3. TEDBF will be lighter than the proposed 25 tonnes Naval-AMCA, production of which will commence after 2030 but will be more capable than the troublesome Mig-29K operated by the Indian Navy on board INS Vikramaditya.

The aircraft would also feature indigenous sensors and avionics, which have already been developed under the existing Tejas program and are under the advanced stage of development for Tejas MK2 and AMCA programs. It will also come with a scaled-up UTTAM AESA Radar with the air and ground/sea mode scanning capabilities in the final testing stage. It will also incorporate an advanced sensor fusion technique that would be helpful in situational awareness. Moreover, the TEDBF will also feature indigenous data-link & communication systems for secure communication and sensor data exchange. The fighter jet would be utilized for multiple roles. To name a few, it will be carrying out air to air combat, anti-ship strikes, maritime strikes, combat air patrolling, escort jamming, buddy refueling, and land strikes.