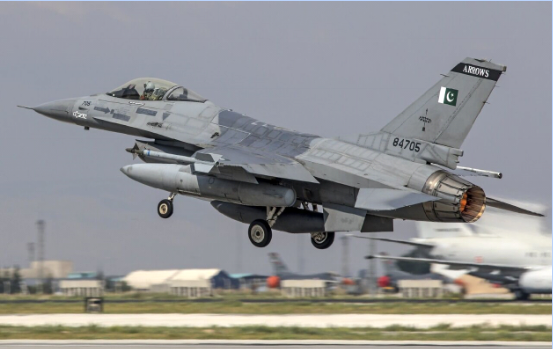 The F-16 Fighting Falcons are, as per the Guinness World Records, the most widely built western fighter aircraft in the world. More than two dozen air forces in the world have used or are still using the services of this dynamic fighter jet in their operations. The United States Air Force has over 1300 F-16 MLU in its fleet, with more than 4000 jets delivered for service worldwide. It has various upgraded versions. The fighter aircraft has time and again proved its worth in operation all over the world. It can carry out a variety of operations.

In the early ’80s, a handful of militaries were using the F-16 aircraft, Pakistan being one of them. By the passage of time, it had been sold to various more countries worldwide. The United States started to sell the aircraft to Pakistan in the wake of its interests in Afghanistan and to procure Pakistani assistance against the Soviet Union. At the moment, the Pakistan Air Force has around 75 jets of different variants. Most of them are of the updated variants C/D Block 52s.

In July 2019, the Pakistani Prime Minister Imran Khan-led a delegation consisting of the high-level Pakistani military and civil officials in Washington. The US and Pakistani delegations held talks on multiple issues, most notably Afghanistan. Speaking at an event, Pakistani Prime Minister Imran Khan said that the US and Pakistan are working together after a long halt. Imran Khan offered to persuade the Afghan Taliban to hold peace negotiations with the government in Afghanistan, a proposal that the Taliban showed interest in. PM of Pakistan Imran Khan held talks with US President Donald Trump.

After the meeting, the reports emerged from the official US sources of a possible foreign military sale to Pakistan in continued support of the F-16 program; the program’s cost was estimated at 125 million dollars. According to the reports, Pakistan had asked for the continuation of technical services from the US government. Although the Trump government’s security aid was halted in 2018, the official reports said that the restoration of security aid programs might be reconsidered because of the relationship. The proposed sale would see some sixty contractors fly to Pakistan in order to assist in the oversight of F-16 operations.

The military relations between the US and Pakistan go way back. In 1981, Pakistan and the United States struck a deal to procure 28 F-16 A’s and 12 F-16 B’s. The development came shortly after the Soviet invasion of Afghanistan, which saw a huge surge in the status of Pakistan as a major US ally in its interests in Asia. However, in 1990, the United States halted the remaining deliveries of the F-16 fighter jets to Pakistan in the aftermath of the Pakistani nuclear program. The relations between the two countries remained in a strain for the majority of the next decade.

There began an era of the resumption of ties between Pakistan and the United States. Since 2001, The US has provided Pakistan with 60 Mid-Life Updates (MLU) kits for its F-16 Falcon fleet. The Update had been carried out in Turkey, and it upgraded the old jets to the new Block-52 standards. In 2006, the US Congress was told that Pakistan was to be provided with over 5 billion US dollars Foreign Military Sales package in order to upgrade the F-16 fighter jets of the Pakistani fleet. Another 14 F-16 fighter jets were given to Pakistan free by the United States, and a batch of six used F-16 jets it got from Turkey. Although all the F-16 fighter jets in Pakistani service are not of the latest Block-52 variant, most of them are equipped with advanced and updated weapons, including air-to-ground missiles AGM-88 HARM AGM-65 Maverick.

Pakistan and Turkey signed a 75 million US dollars agreement to upgrade the F-16 fighter jets. Reportedly, the upgrade was to enhance the Pakistani F-16’s MLU for the night operations. According to US officials, Pakistan seeks to purchase the MLU program to upgrade its operational abilities with the F-16’s. The proposed updates will allow the A/B variants to operate freely and boost Pakistan’s deterrent abilities. The MLUs can be used to extend the operational life of the aircraft.

Additionally, Pakistan also procured another 18 F-16 fighter jets of the new block-52 C/D version, for which it paid the United States 1.43 billion dollars. With this procurement, Pakistan also got hundreds of AMRAAM (advanced medium-range air to air missiles), which were used to bring down an Indian Mig-21 fighter jet in a 2019 dogfight. The newly procured fighter jets have the new APG-68(V)9 radar system, the most advanced radar used in F-16 jets, except for the UAE’s variant of jets. The proposed MLU included the upgrades such as the addition of APG-68v9 radar, AN/ALE 47 advanced countermeasures dispenser systems, advanced air combat maneuvering units, 60 ALQ-213 electronic warfare management systems, and a unit level trainer.

Over the course of 70 years, the US policy on Pakistan has seen many ups and downs. At the moment, the relations between the two countries and their defense cooperation largely depend on the role Pakistan plays in Afghanistan. With the US withdrawing its troops after a long war, the policy shift is imminent. It will be interesting to see what status does Pakistan gets in US policy after the withdrawal of US troops from Afghanistan.