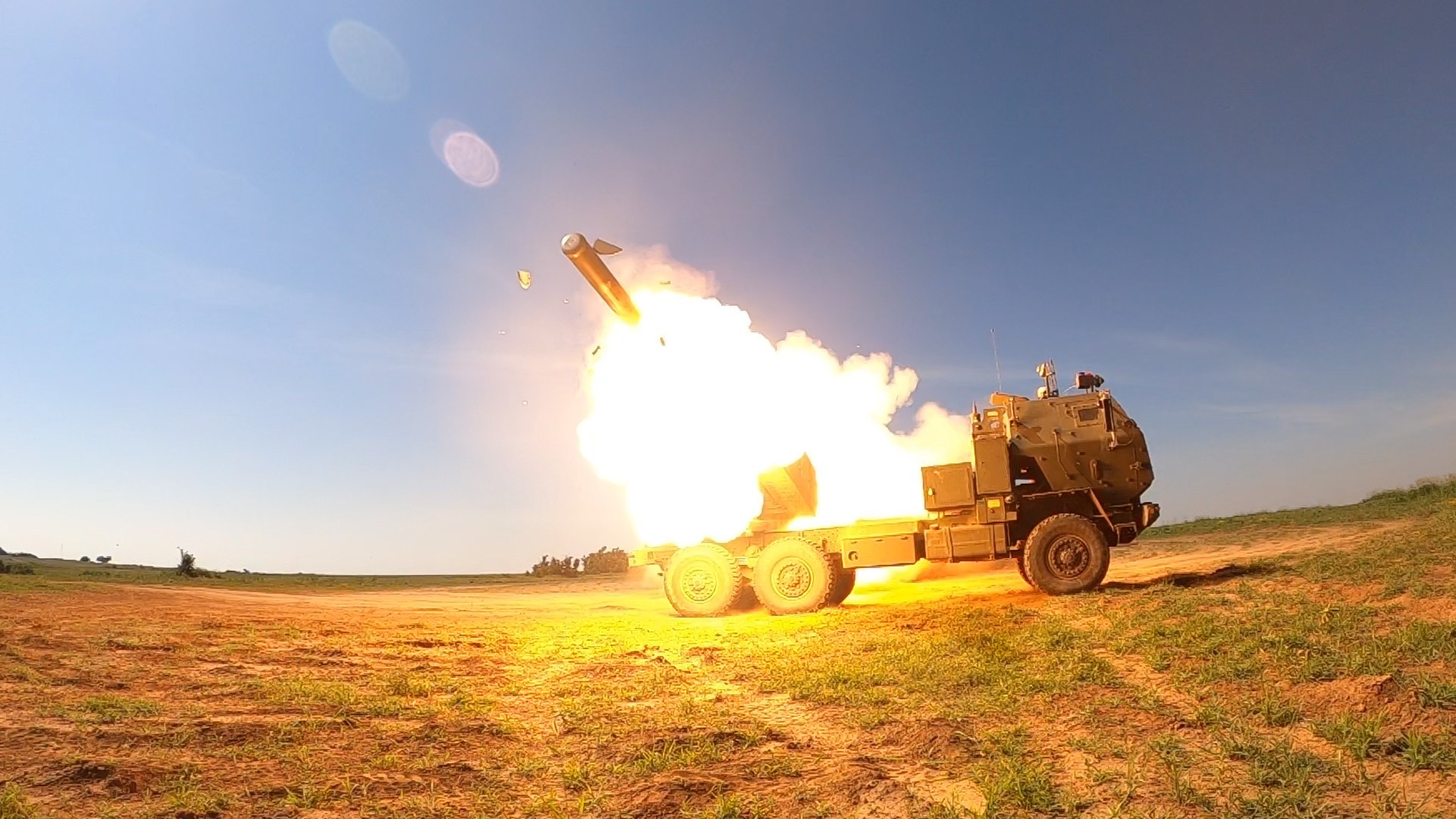 U.S Army held a demonstration at Fort Sill, Oklahoma, on June 16 in which it fired an autonomous launcher to determine how it might be deployed to capture enemy ships and other defensive systems in multidomain operations in the Pacific Focus Demo. The U.S Army broadcast a concept video that shows C-130 transport aircraft making a landing on a strip on an island in the Pacific ocean. The Autonomous Multi Domain Launcher, or AML, proceeds from the C-130’s ramp while a High Mobility Artillery Rocket System or HIMARS rises from the other aircraft.

The two launchers deploy as either manned-unmanned team to the strategic points scattered on the island. One of the launchers fires a Simulated Precision Strike Missile or PrSM – the future Army Tactical Missile System replacement – to hit an enemy spotted in the ocean. The other Launcher fires an extended-range version of PrSM to attack an air defense system located on an enemy-occupied island. As soon as the missiles meet their targets, the launchers reoccupy positions in the bellies of the C-130, and the aircraft moves back. Meanwhile, the U.S fighter jets started to deploy in the meantime; the missiles were destroying the enemy strongholds.

According to Brig. Gen. John Rafferty, who is in charge of the Army’s long-range precision fires modernization effort, ‘during the demonstration, the AML repeated the process and subsequently deployed to two other islands following the first scenario.’ The demonstration was conducted on behalf of the Long Range Precision Fires Cross-Functional Team (LRPF CFT), in association with the Development Command’s (DEVCOM) Ground Vehicle Systems Center and the 18th Field Artillery Brigade. The mission lasted for 1.25-hour and was led by soldiers from the HIMARS platoon in the18th Field Artillery Brigade based at Fort Bragg, North Carolina.

Seven rockets were fired, imitating the PrSM’s future range capability from around 500 kilometers to well over long distances. The service also made a powerful show of the shorter-range rocket capability in the third island scenario to demonstrate a more tactical flight supporting division and corps. The effort in this regard was launched years ago to develop prototype launchers by the integration of science and technology. As a result, the AML is supplied with a remote launcher turret and designed to have a fire control system that enables compatibility with current munitions like the Guided System of Multiple Launch Rocket and future weapons like PrSM.

The demonstration exhibited that the soldiers were attempting to use autonomous Launchers to help them transmit current activities within operations that are dangerous or can’t be done with systems today. The received response showed that soldiers felt the capability would keep them in the fight longer and offered more protection and augment lethality such as a deeper magazine. Easily one of the biggest things it does is it just physically gives us more room without having to spend gazillions of dollars to buy a whole new launcher. It enables us to kind of use what we have and do some minor modifications to it, which gives us options moving forward however the Army chooses to move forward with the missile fleet.”  stated Jeffrey Langhout, the Aviation and Missile Center director, during the call with reporters.

The program also utilizes technology efforts currently under development within the Army, such as the robotic technology kernel that will be used in the future robotic combat vehicle capability, other mature technology-enabling leader-follower autonomy, and the warfighter machine interface. The whole exercise has cost roughly $10 million so far that also trickled from the Congressional plus-ups to manufacture the prototype and demonstrate its capability. The demonstration served to reflect AML’s lethality potential in anti-access/area-denial (A2/AD) multi domain operations, specifically in the Indo-Pacific theatre.

“This provides the Warfighter an agile, deployable, mid-range capability that will be survivable in an archipelagic working situation, island hopping type of campaign, to engage a variety of A2/AD targets,” noted LRPF CFT Director Brig. Gen. John Rafferty. Nonetheless, demonstration marks a starting point for the AML system, and the Army has yet to decide whether the system will be part of the future force. Rafferty said the Army would continue to collaborate with the operational force in the Indo-Pacific ocean to develop the concept, and the service will continue to build and mature the technology.