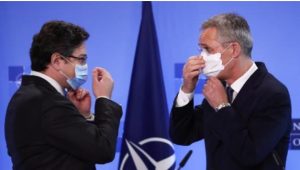 Ukraine’s President Volodymyr Zelenskyy, on June 15, 2021, applauded NATO members for understanding the challenges and risks faced by Ukraine in his tweet. In the same tweet, he mentioned that NATO leaders had confirmed Ukraine’s membership in the Alliance. When questions were asked to the Ukraine President about the matter, he said he wanted to get a ‘yes’ or ‘no’ from the US President about the full membership plan of Ukraine into NATO. In addition to the fact that this tweet was made a few days before Vladimir Putin and Joe Biden’s meeting, it appears that Ukraine Membership was intended to interpret NATO and Biden’s interaction in its favor.

On the same day, US President Joe Biden had a conference. In that conference, he didn’t mention any such action or decision taken by NATO allies. Bide didn’t answer in ‘yes’ or ‘no’ to Ukraine membership. However, he was clear that NATO leaders and allies would support Ukraine’s sovereignty and territorial integrity. He further said that Ukraine membership depends on the fulfillment of the criteria, but the US and NATO members would continue to support Ukraine in confronting physical aggression by Russia.

In response to this tweet, NATO Secretary-General Jens Stoltenberg clarified that NATO leaders made no such decision regarding Ukraine membership. He said that ‘Ukraine is an aspirant country’ and NATO, along with its political support, provides strategic support to help Ukraine’ modernize and refine’ its security institutions in line with NATO principles and standards, keep civilian-political control over the security services and fight corruption. He also said that Ukraine is working on reforms to fight corruption and other criteria concerns. However, much is needed to be done for the complete implementation of the reforms before Ukraine can join NATO.

One day before this tweet, on June 14, 2021, Jens Stoltenberg had clarified his stance that despite Ukraine having been in high expectations, NATO has not yet reached there to give membership to Ukraine. He said that NATO remains ‘in solidarity with Ukraine.’ He further mentioned that NATO provides political and practical support to Ukraine, its sovereignty, territorial integrity, and people. Moreover, he said that NATO allies also have bilateral relations with Ukraine, and they are stepping up the practical support to Ukraine within and outside NATO.

According to a US official, nothing about the Ukrainian membership had changed since 2008 when NATO gave its commitment that Ukraine would one day be a part of the Alliance working on the same page with allies. He further mentioned that NATO members would keep standing behind Ukraine in their support, but membership is not decided because all allies are not unified. Lastly, Ukraine has high expectations regarding its membership process and has embarked upon several NATO-mandated reforms to move towards NATO membership and tackle Russian aggression and interference.