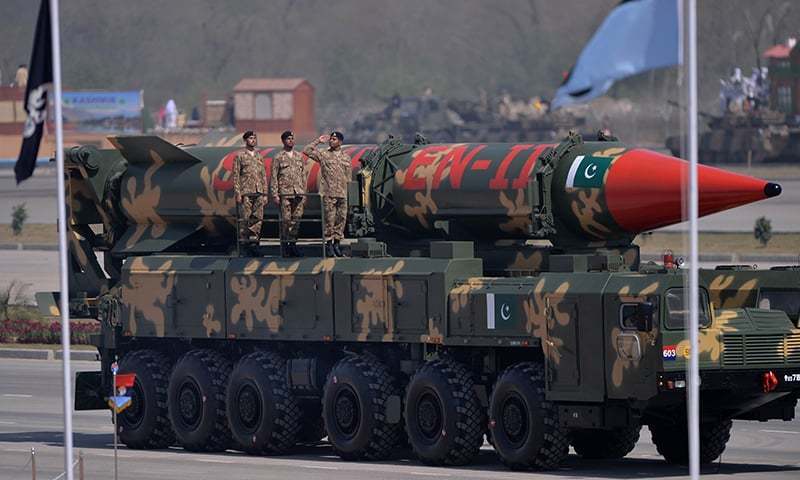 Pakistani military personnel stand beside long-range ballistic Shaheen II missiles during the Pakistan Day military parade in Islamabad on March 23, 2015. Pakistan held its first national day military parade for seven years, a display of pageantry aimed at showing the country has the upper hand in the fight against the Taliban. Mobile phone networks in the capital were disabled to thwart potential bomb attacks, some roads were closed to the public and much of the city was under heavy guard for the event. AFP PHOTO/ Aamir QURESHI 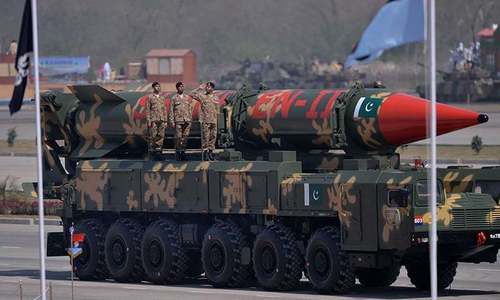 Though the budget is already increased by Rs 44 billion, there are chances of armed forces overspending owing to security threats and defense postures according to contemporary security challenges. Last year, the government revised the defense budget from 1. 23 trillion to 1.33 trillion due to overspending. However, these figures and percentages don’t depict the actual amount of defense expenditures. The defense expenditures also include payment to retired military personnel, military acquisitions, and spending related to the nuclear program, which is neither fixed nor taken from the allocated defense budget. For instance, the amount proposed for paying to retire military service members is about Rs 360 billion; it is supposed to come from the civilian government’s budget.

There has always been a lot of debate, in Parliament and among the public, regarding the defense budget. With so much going on with internal and external security and defense situations, the Government of Pakistan has deemed it appropriate to strengthen the defense status. On the inside, with the rising extremism, militancy, and prospects for the resurgence of Tehreek-i-Taliban Pakistan (TTP), the internal security situation of Pakistan is not encouraging. Instead, it is multiplying the challenges. On the outside, the security situation of Afghanistan after the complete drawdown of US and NATO troops increases the fear of violence and conflicts across the border that can potentially transact it into Pakistan.

Moreover, compared to Pakistan’s arch-rival India, Pakistan spends a lining of what its opponent spends. Pakistan’s defense budget is 5.5 times less than the Indian defense budget, with a gap of almost $40 billion this year. But still, within Pakistan, the defense maintained its importance. Furthermore, the Chief of the Army Staff (COAS) has indicated the indigenization of defense production. This step would curb foreign spending and increase the head for civil works and physical assets. Also, Pakistan’s Army campaigns and armed forces’ welfare organizations like Army Welfare Trust and Fauji Foundation have contributed much to the civilian cause, without demanding funds and grants from civilian or otherwise budget.