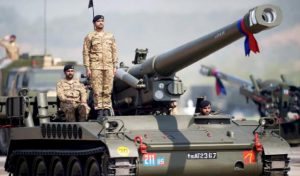 Despite the economic challenges it faces, Pakistan has progressed on the vital Artillery Modernization programs to boost its conventional military capabilities, consistent with a recently revealed official document. However, mounting debt and enhancing the cost of imports alongside low government income hit the military modernization efforts strongly. That, along with the economic conditions imposed by the International fund, also as economic devaluation, increased the necessity for indigenous solutions. Details of the development, the replacement of foreign armament, and procurement plans were recently issued by the Ministry of Defence Production in the annual “Year Book” document.

The Defense Production ministry oversees all aspects of state-owned defense industrial enterprises, local production programs, and foreign procurements. The document shows the prioritization of armored sectors and aviation. Efforts toward enhancing the armored abilities include finding substitutions to component imports and homemade production, notably: The production of auxiliary power units for the Al-Zarrar and T-80UD tanks. The manufacturing and test of a sabot FSDS-T round. The manufacturing of a driver’s thermal imaging and night imaging periscope. The making of engines for the Al-Khalid and T-80UD tanks. The rebuilding and advancement of 160 Type-85 IIAP main battle tanks. A major plan to rebuild T-80UDs (completed in August 2019). The ongoing up-gradation of M113-series armored crew carriers.

The continued advancement of Type-59 main battle tanks to the upgraded Al-Zarrar version. The low effort development of 20 Al-Khalid I tanks and the last-stage production of the Al-Khalid II (having an upgraded electrical converter and gun-control system). A plan for a tracked infantry fighting vehicle, or IFV, was also listed within document of ministry. State-owned armored fighting vehicle builder HIT developed the Viper to satisfy this need. The static prototype was demonstrated at the IDEA 2018 defense exhibition. The platform supported the M113 series but was armed with a Slovak Turra 30 unmanned turret.

In the past, Pakistan has had border skirmishes with not just India but also Afghanistan. Post-2001, Pakistan’s internal security had been threatened by the activities of Al Qaeda in Afghanistan and within the border tribal areas of Pakistan. Pakistan had used long-range artillery weapons in eastern Afghan provinces. Even towns with the border like Khost, Nangarhar, and Kunar regions were also subject to artillery shelling, killing and wounding many terrorists. On the other side, Iran is also a continuing threat to Pakistan because it is believed to fuel terrorism activities in Balochistan. Therefore, Pakistan’s conventional weapons need to be upgraded to be ready to counter these types of threats. The advantage of attacking the insurgents or enemy with the assistance of artillery is that it can take the enemy all of sudden, not prepared for retaliation.

However, it must be noted that only in the phase III clinical trial of the counter-insurgency operations could artillery play a crucial part. Heavy artillery in counter-insurgency operations is meant to demolish suspected terrorist camps. The Pakistani military, in its personnel, has almost 650 thousand draft soldiers. The Pakistani military is split into Land, Air, and Naval branches. Each of the military parts has its command, different combat units, and is very autonomous. It’s a professionalized army with a considerable number of reserves, working closely alongside the paramilitary forces. Pakistan is also one of the world’s nuclear superpowers, possessing an estimated 160 to 180 warheads. The number varies, counting on the source of knowledge. It is rumored that Pakistan will be procuring over 500 thousand of the latest automatic rifles that might replace the weaponry that was being used thus far.

Pakistan carefully approaches the difficulty of selection when it comes to new armament, studying all of the pros and cons of potential products. The research areas include a spread of ammunition types, operational theatres. Airpower happenings mentioned in the ministry’s document revolve around the JF-17 fighter program. An agreement was signed for the twin-seat and upgraded Block III variants in May 2018. However, the developments to the preceding versions are continued, notably air-to-air refueling addition and, therefore, the procurement of Chinese CM-400AKG anti-ship missiles to enhance the defenses.

The Pakistan Army (PA) is essentially composed of infantry battalions with a relatively small number of tanks and a few reasonably sized artillery to support them on the battlefield. However, in some recent counter-terrorism operations, tanks and air support played a vital role in eliminating insurgents. Both provided strong support to infantry and a serious psychological advantage. THUS, the PA rediscovered the importance of armor and realized that MBTs and air support could provide a significant morale boost to the soldiers during a future conventional war.

Pakistan’s first tanks were handed down from British Indian Army. They were thirteen odd Stuart tanks to defend a total border of 5,000 miles. As the years passed, Pakistan began to accumulate US-made tanks. However, after the 1965 war, as the Western weapons supply lines began to shrink, Pakistan began procuring Chinese tanks. Starting with the T-59, Pakistan soon maintained an outsized stock of Chinese tanks, including the T-69 and T-85. Pakistan’s first locally made tank, the Al Khalid, is itself a version of the MBT 2000, Type 90 IIM tank. There were, however, certain negatives of the Chinese tanks. This included the engine issues, target set systems, transmissions, and build quality. After the Soviet Union collapsed, the Pakistan Army dealt with Ukraine, from where it gathered T-80UD tanks and engines for its T-59 advanced version (al-Zarrar program) and in its local Al Khalid program.

Pakistan’s current arsenal of tanks thus includes Chinese, Ukrainian, and locally-made tanks. The most critical number goes to T-59 tanks, with about 1200 of them in service. About half are upgraded to al-Zarrar, with thorough modernization including armor, engine, gun, and firing systems. The opposite 600 T-59s are enhanced to the T-59 II variant, and it’s been thought to upgrade all of them to the al-Zarrar variant. The engine for these tanks has been bought from Ukraine, while the hearth system (FCS) and Battle Management System (BMS) are indigenously developed, with various components coming from France and China. The tank gun is locally made and supports the Chinese 125 mm gun, which supports Eastern European designs. The steel utilized in the gun was brought from France, but more recently is being produced locally.