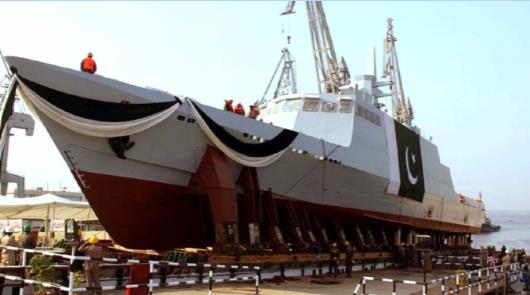 This Azmat-class FAC is a state-of-the-art, multi-mission corvette having a length and breadth of 63m and 8.8m, respectively. With a design draught of 2.46m and a displacement of 560 tons, the vessel has been manufactured with low-detectability and low-observability characteristics. The Pakistan Navy uses the ship to support its peacetime littoral patrol and policing tasks. During wartime, the FACs are also meant to guard Pakistan’s coastal assets, such as its ports, shipyard(s), and dockyards, from attacks by intruding enemy surface warships (including other FACs).

The state-of-the-art vessel incorporates a superstructure made of aluminum and a steel hull. Built as per the China Classification Society (CSS) rules and guidelines, each ship features stealthier design integrating modern missile and combat systems, as well as surface search and tracking radars.

The Azmat class is armed with one 30 mm forward gun, two 12.7 mm machine guns, and a single AK-630 close-in-weapons-system (CIWS) to protect it against incoming anti-ship missiles and other precision-guided weapons.

The vessel is installed with two quadruple missile launchers to fire eight C-802 anti-ship cruise missiles. The latter is an extended-range export variant of the Chinese-built YJ-8 anti-ship missile. It is capable of carrying a 165kg time-delayed, semi-armor-piercing, high-explosive warhead. The C-802 has an attack coverage of up to 180 km and can travel at a speed of Mach 0.9. It is also equipped with an inertial and terminal active radar guidance system.

The ship is powered by four diesel engines driving four fixed pitch propellers (FPPs) through a pair of two propulsion shafts. This propulsion system provides high maneuverability to the vessel during high-intensity missions. The FAC can travel up to 30 knots (55 km/h) and has a range of up to 1000 nautical miles.