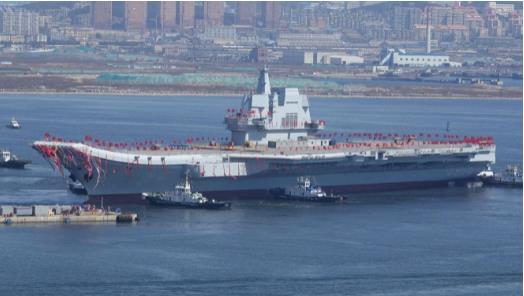 Substantial progress in the construction of the Third Aircraft of China has been witnessed with the help of commercial satellite imagery. This aircraft carrier is also known as Type 003. Significantly enhancing the naval capabilities of China, this aircraft carrier would be the largest surface combatant of the PLA’s Navy. Since 2018 the work on Type 003 has been started at Jiangnan Shipyard Shanghai. Over the tenure of the past several months, the prefabricated parts of the vessel’s hull portion have been assembled. The satellite images taken on May 30th, 2021, show that the flight deck has been completed partially. Key insight on its configuration could be put after a focused analysis of Type 003’s status.

The third aircraft carrier will be larger as compared to the previous models, the Shandong and Liaoning, both of which are 304.5 meters in length. According to the previous assessment made by CSIS regarding the size of Type 003, it was estimated to be 40 meters wide and 300 meters in length. But after the flight deck has been shaped, the overall length has been increased to 315 meters and width to 74 meters. As the work progresses, Type 003 will continue to grow. The Kitty Hawk class of carrier operated from the 1960s to 2000s by the U.S. The Navy can be a good comparison for size with Type 003. The overall length of Kitty Hawk was around 324 meters, while its waterline length was around 300 meters.

In addition to the up-gradation in its size as compared to the previous aircraft carriers, Type 003 is also expected to feature a flat-top flight deck with CATOBAR (catapult assisted takeoff but arrested recovery) system. The previous models like Shandong and Liaoning used a ski jump style system. Larger aircraft that have a lower thrust-to-weight ratio and fixed-wing aircraft with more fuel and heavier payloads could be launched using the catapult system in Type 003. Mostly the CATOBAR systems are steam-driven, but the trend will be changed soon. The U.S. Navy’s EMALS (electromagnetic aircraft launch system) helps in faster take-offs, increased energy efficiency, and reduced maintenance. There are rumors that the Chinese are planning to outfit the new Type 003 with the EMALS system. This decision of using the specific kind of catapult was taken many years ago, but the use of EMALS-type remains unconfirmed; any change or alteration in the current work can bring severe challenges and delays.

With the updated launch system and increased size, the Type 003 will set a precedent for a more diverse carrier air wing. The early warning and control aircraft (AEW&C), such as KJ-600, will be included in the air wing, but around two years are required for the aircraft to find its home on Type 003. The warfighting capabilities and situational awareness of PLAN (People’s Liberation Army Navy) will significantly be enhanced after the induction of Type 003 in the fleet. An upgraded Island will be used for flight deck operations along with communication equipment and a radar system. Type 003, as compared to Shandong, will pose a smaller island for flight deck and crucial real estate. Tucked between two movable environmental shelters, the island was visible near the vessel as per the imagery from May 30, 2021. Aerial imagery of Jiangnan with a low altitude confirmed the presence of the island at Jiangnan.

There is an ambiguity in the presence of the number and size of aircraft elevators on Type 003. These elevators are extremely important for an aircraft carrier because they can be used to uplift the aircraft from the internal hanger bay and the flight deck during flight operations. Two starboard-side aircraft elevators similar to Shandong are installed in Type 003. These elevators will be comparatively larger than the Shandong version. This would enable it to lift two aircraft at the same time. The Gerald Ford of the US has three elevators, and Charles de Gaulle has two elevators, all of which can lift two aircraft simultaneously. The recent plans are to make the Type 003 conventionally powered, but the People’s Liberation Army’s Navy is expected to make updated versions that will be nuclear powered. China will place itself on an elite footing with France and the United States because they are the only two states having nuclear-powered aircraft carriers.

Until additional progress is made, it is not possible to tell the details of Type 003. There are large openings in the aircraft carrier for the workers to move the components into the forward and aft engine rooms. Many parts are still in the building phase and will take time to be completed. The satellite imagery shows that many structures for the island are positioned close to the vessel, and soon they will be installed at their proper place. Type 003 will be a formidable addition to China’s Navy, and it would increase China’s influence on the Pacific and the Indian Ocean. It may not be launched until 2022, and even after the launch, it would take several years for the vessel to complete sea trials, and then it will be commissioned to PLAN.