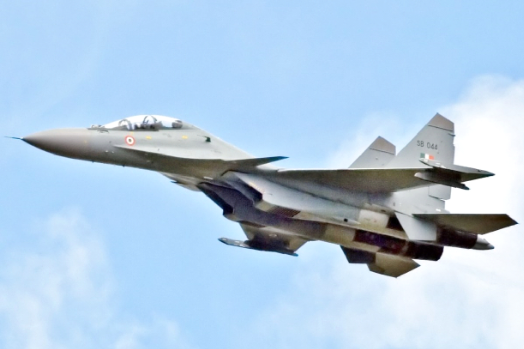 Jointly developed by the Hindustan Aeronautics Limited (HAL) and Sukhoi Design Bureau for the Indian Air Force, Sukhoi Su-30 MKI is a multirole fighter jet. The Su-30 MKI aircraft is an upgraded Su-30 fighter jet with thrust vectoring control and canards. The development of this started in 1995 for Indian Air Force. Initially, the responsibility of production and development for these aircraft was with the Irkutsk (now known as Irkutsk Corporation) and Sukhoi Aircraft Production Association. Between 1995 and 98, two prototypes of the Su-30 MKI were built by Sukhoi. In July 1997, the prototype Su-30I-1 made its first flight. In 2000 the production officially started at the Irkutsk plant. The same year the first pre-production aircraft had its maiden flight. An MOU was signed between Russia and India to start the production of Su-30MKIs at HAL.

At the Thanjavur airbase of the Indian Air Force, in the southern region of India, a new squadron named 222 Squadron (Tigersharks) was stood up. The fighter jets of this squadron have the capability of carrying BrahMos supersonic missiles cruise missiles. The indigenous overhauling of the Su-30 MKI fighter jets was achieved soon by India. The first batch of domestically overhauled Su-30 MKI aircraft was received by Indian Air Force in October 2018.

32 Su-30MKI and eight Su-30K fighter aircraft were ordered by India in November 1996. These aircraft were delivered in batches, and they were upgraded with advanced avionics, weapons, and engines. A contract with Rosoboronexport was signed by the Hindustan Aeronautics Limited (HAL) in December 2000. Under this contract, HAL in four different phases HAL was meant to produce 140 Su-30MKI fighter jets till 2015. The Russian-made batch of the first 10 Su-30MKI jets was delivered in mid-2002. These aircraft were inducted into service in September of the same year. In 2003 the second batch of 12 aircraft was delivered to India.

In November 2004, the first aircraft rolled out, which was assembled by HAL. Two aircraft as part of the first batch were delivered in March 2005 to the Indian Air Force. In 2007 another order was placed by the Indian air force with HAL for manufacturing 40 Su-30 MKI jets. Another contract was signed by the Ministry of Defense and Rosoboronexport with HAL for the production and delivery of 42 Su-30 MKI fighter jets. After this contract, the total number of jets ordered for manufacturing increased to 222. As of January, the Indian Air Force operates around 260 Su-30 MKI multirole fighter jets. Twelve more jets were in line to be delivered at the end of the same year.

Avionics and Design of Su-30 MKI:

An aerodynamic airframe made of titanium is used in the Sukhoi Su-30 MKI jets with high-intensity aluminum alloys. Horizontal tail consoles and twin stabilizers are joined together to the tail beams. The radar section, avionics bay, and cockpit are part of the semi-monocoque fuselage head. The break parachute mechanism, the equipment bay, and the fuel storage is present between the engine nacelles. The aircraft’s wingspan is 14.7m, its length is 21.9m, and its height is 6.4m. 38,800kg is the maximum takeoff weight of the aircraft. The cockpit of Su-30MKI made of tandem glass has the capacity of two pilots. Seven AMLCD displays, primary cockpit instrumentation, and Elbit Su 967 head-up display are installed in the forward cockpit. A malfunction display (MFD) has been installed in the HAL-built aircraft. The Samtel Display system powers this display.

A flight control system FBW (fly by wire) has been integrated with the aircraft. Air to ground missile guidance is provided with the help of a large monochromatic display screen installed in a rear cockpit. Electronically scanned array radar N011M is present in the Su-30MKI. For guiding laser-guided munitions – air to surface missile lightening-target destination pods and OLS-30 laser-optical locator system are also installed in the fighter jet. Currently, N011M has been replaced with Zhuk AESA (active electronically scanned array) radar.

Countermeasures and the Weapon Systems:

The Su-30MKI jet is armed with 150 rounds of ammunition with a 30mm Gsh-30-1 cannon. Capable of carrying external stores up to 8t the aircraft features 12 hardpoints. A range of air to surface missiles, including kh-31A/P, Kh-29L/T/TYe, Nirbhay, and Kh-59M, can be launched from the aircraft. A successful test was carried out in November 2017 of the air-launched version of BrahMos supersonic cruise missile using the Su-30MKI aircraft of IAF. This supersonic cruise missile has the capability of striking a target 290 km away.

In December 2019, the third live firing of the cruise missile after a successful process of integration of the cruise missile was carried out. The aircraft can carry rocket pods and air-to-air Vympel-built missiles like R-73, R-27R, and R-77, plus laser-guided bombs, including KAB-1500 and KAB-500. A Tarang radar warning system (RWR) has been fitted in the Su-30MKI jets. This radar system is indigenously developed by the Indian Defence Research and Development Organization (DRDO). The aircraft also possesses active jammers and flare dispensers.

The Indian government is planning to procure 12 Su-30 MKI jets and 21 MiG-29 jets from Russia. This decision was taken after the approval of procuring 83 more Light Combat Aircraft Tejas from HAL. The existing fleet of the Tejas will also be passed from a process of modernization. Indian Air Force currently has 272 Su-30MKI jets already contracted from Russia for around $15 billion, with a greater number of the jets to be produced by HAL.

Out of these 272 jets, 268 have already been inducted by the air force. Nine of these fighter jets have been lost in different accidents and crashes. After the recent clash with the Pakistan Air Force and losing two powerful fighter jets, India is trying to develop its air force unmatched. The recent deal of the up-gradation of the existing fleet and procurement of new jets lends credence to the speculation. With the development of its fighter jet fleet, India is also trying its best to get its human resource skilled by engaging them in multiple air combat exercises. All such efforts will enable India to develop a more upgraded and skilled air force.