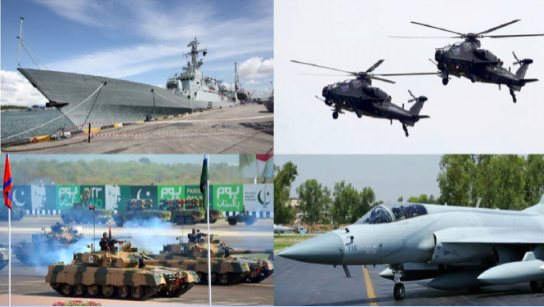 Defense Sector offsets are defined as the additional deals and privileges that the importer gets from the firms and states it imports its defense equipment and technology. It ranges from getting investment in other sectors like construction or bringing foreign technology to the state or country. The procurement of defense and military deals requires investing a lot of money and capital, so it is rather beneficial if a country can bring some investment or foreign capital in the form of side deals or investments. Pakistan spends 4% of its Gross Domestic Product (GDP) on defense. It’s a handsome sum of money for a developing country. Pakistan has the potential to increase foreign investment under defense offsets. An offset policy would demand the foreign firms to spend some percentage of Pakistani investment back in Pakistan. Pakistan’s existing offset policy has not properly been used when striking defense deals.

Pakistan actually has an official offset policy, which says that the contracts which are valued above 15 million US dollars shall have an offset value of 30%. It means that the foreign firms making deals worth 15 million $ are obliged to invest 30% of the amount in Pakistan in return. In the 2020 performance report, the Pakistani ministry of defense stated that a new offset policy had been drafted. The new offset policy is a part of the Pakistani government’s efforts to attract and bring more foreign investment into the country. Additionally, the new offset policy seeks to arrange the mechanisms for the transfer of technology and information sharing between foreign suppliers and local firms.

The ministry of defense said that the new offset policy is being circulated among the stakeholders, after which it shall be presented for the government’s final approval. The main objectives of offset policy, as mentioned by the defense ministry of Pakistan, are; to lessen the negative effect of purchase on the national economy, valuing the national economy, attract foreign investments, R&D activities, technology sharing, and cooperation with foreign firms and countries, bringing reasonable foreign exchange through defense deals and agreements, introducing a thorough and profitable joint venture between local manufacturers and foreign investors, upgrading the expertise and skill level of the national workforce, introducing job opportunities for the skilled youth of Pakistan, and developing, enhancing the defense industry of Pakistan. The current defense offset policy of Pakistan, if applied fully, is capable of benefitting the economy while drafting the mega defense deals.

The ministry of defense’s proposal indicates that Pakistani stakeholders benefit from good offset policy perks. Pakistan generally doesn’t export many goods, nor does it attract investments, so it is a good start to bring in foreign investments by making offsets mandatory in defense deals. While it may seem easy to engage foreign firms and parties in offsets, but it sure is not an easy task when implementing. The foreign groups review many things in a country before investing big. The overall security situation, state of democracy, economic condition, barriers, and political situation matters a lot when striking such deals.

In many cases, the offsets have contributed positively to a country’s economy, and some offset values even crossed the cost mentioned in contracts. Internal stability is the basic foundation of attracting foreign investments under offsets. Traditionally, the Pakistani military plays a major role in making defense deals. Being a powerful institution, military spending is rarely audited. It is not the civilian government but the armed forces themselves who must see the offset policy being implemented while striking the defense deals.