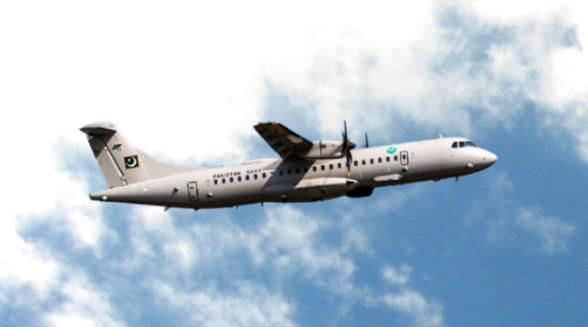 A modern maritime turboprop patrol aircraft RAS-72 Sea Eagle MPA, intended for maritime surveillance, maritime intelligence, target acquisition, and reconnaissance. This jet can also be used for anti-submarine and anti-surface warfare. Two aircraft have been delivered so far, and two more are needed to be delivered by next year. The jet will complement the 10-jet powered LRMPAs and will replace the Fokker F27 of the Pakistan Navy. French-Italian ATR 72-500s are bought off-the-shelf. Then the German defense contractor Rheinmetall Airborne Systems (RAS) carries out modifications by installing various German, American, Italian, and British weapon systems, subsystems, and sensors.

Combining German engineering, the RAS aircraft gets state-of-the-art mission equipment and develops a reliable, unique multirole special mission aircraft. Having anti-submarine warfare capabilities, the Sea Eagle is a multi-role maritime patrol aircraft. For providing superior situational awareness, the Sea Eagle has been fitted with state-of-the-art technologies. It is equipped with a long-range X-band Leonardo Seaspray 7300E ASEA multimode radar, having a range of 600 Km for target acquisition and surveillance. It provides high-resolution images for surveillance operations over sea and land using SAR (synthetic aperture radar). To provide ground, aerial and maritime surveillance day and night, sensors and FLIR star SAFIRE III EO/IR (electro-optic/infrared turret have been used. It enables the crew to survey in multiple modes using video/imaging feeds and acts as a target laser designator, allowing RAS-72 to launch air-to-ground laser-guided missiles.

Having sonobuoy launchers, the aircraft possesses an acoustic processing system. Two external weapon hardpoints could be modified into four hardpoints for missiles and torpedoes. Such modifications give the Sea Eagles a unique capability for anti-submarine and marine warfare. AeroMission and Aerodata Management system is used for managing the installed sensors and mission systems. Using feeds from the installed sensors on each control system, AeroMission can display feed. The aircraft uses a sensor fusion algorithm to provide comprehensive and concise situational information to the onboard crew. The indigenously tactical data link protocol system developed by Pakistan called ‘Link Green’ has been installed to relay the information via tactical data link. This Link Green has been used in many other airborne and surface assets by Pakistan.

RAS-72 can receive and exchange data with Pakistan’s NIXS (Naval Information Exchange System) using Pakistani military satellites. Targeting support and situational awareness can be provided to Pakistan Navy’s Azmat class FAC-Ms with the help of RAS-72. It would also help the aircraft to utilize its anti-ship missiles against the targets. The RAS-72s would transfer and communicate at BLoS (beyond-line-of-sight) range using the SATCOM (satellite communication) suite. It also possesses Ku-band terminals for utilizing the Pakistani military satellites like PakSat-1R.

To record and monitor radar emissions, Onboard ELINT sensors are used. These sensors also enable the building of an electronic warfare threat library. Configured to the fuselage at both sides, the ELINT suite uses 10 antennas. In addition, laser warning receiver, (RWR) radar warning receiver, countermeasures, and Defensive aid system, and airborne self-protection suit are essential elements of the modifications made in the RAS-72 for the Pakistan Navy. All these modifications are provided by the leading European electronic warfare firm Electronica Group. Pakistan Navy’s air operational capabilities will increase with this jet due to the state-of-the-art sensors and weapons it carries. RAS-72 is the only aircraft that offers both ASW and MPA capabilities, networking, unparalleled performance, and superior sensor fusion.

According to Nikolaos Mavrikis, the special mission division director of Rheinland Air Services, Pakistan Navy will become the newest operator of Aerodata’s Mission Management system and RAS’s latest airborne platform for anti-submarine warfare. He further asserted that after working in coordination with the naval aviators, operators, and Pakistan Navy officials, it is confirmed that this program has not only modernized the naval fleet of Pakistan but also enhanced the organization’s capabilities. RAS-72 Sea Eagle has endorsed surveillance in the international waters as well as the country’s coastal borders.

In addition to maritime patrol missions and anti-submarine warfare, the jet can also be used for humanitarian operations like search and rescue missions. It can transfer information in real-time to the command and control center. The sensors used in the jet enable it to identify targets both above and below the ocean’s surface. The official induction of both maritime patrol aircraft ATR-72 upgraded to RAS-72 Sea Eagle was carried out in January 2020. The up-gradation project was given to Rheinland Air Services, but the equipment used in this modification was manufactured by EMT Penzberg. The first RAS-72 jet was delivered to the Pakistan Navy in 2018. According to RAS, Pakistan still has an option of converting the other two ATR-72 jets that are used mainly for Cargo and paradrop missions. These aircraft can be armed with two ASW lightweight torpedoes.

Maritime security is of prime importance in the current scenario. CPEC, the flagship project for Pakistan, requires a vigilant fleet for securing the trade routes at sea. Having both ground and sea combat and surveillance capability, RAS-72 is the best aircraft to be used for securing the trade routes of CPEC. Pakistan is currently in a phase of transition in terms of internal and external security environment after the with-drawl of US forces from Afghanistan. The region will face a strategic as well as a tactical vacuum after the US withdraws its forces from the Afghan soil.

Pakistan is already on the track of success after the completion of a major portion of CPEC. However, it desperately needs the assurance of safety for foreign investors. Both the land and sea routes are needed to be secured to provide a safe trading environment. Enemies of Pakistan have their evil eyes on this project. Many attempts have been made to fail the CPEC projects, and similar plans are being strategized for the future. A viable-modernized fleet of jets like RAS-72 is a basic necessity without which secure routes cannot be guaranteed. After the purchase of two RAS-72, the next step should be the up-gradation of the remaining ATR-72.