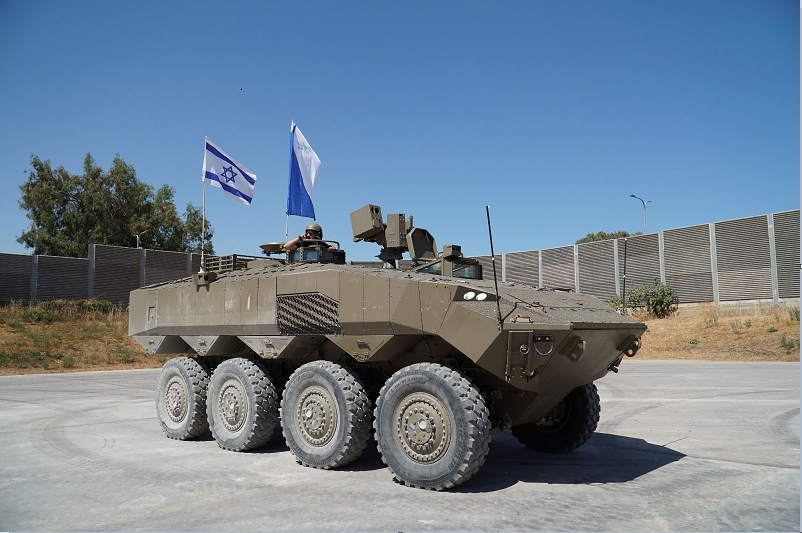 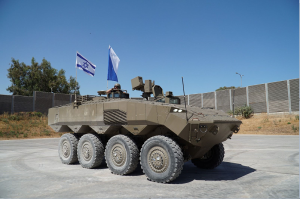 d a large-scale serial production of the “Eitan,” the world’s first wheeled armored personnel carrier. During a ceremony at the Merkava” factory in Tel HaShomer, the first systematically built Eitan APC rolled off the assembly line and would be given to the Israeli Army (IDF) Nahal Brigade for military use.

Eitan is a vehicle with eight wheels that is powered by Merkava and Namer technologies. It has a capacity of 12 military personnel. The 750-horsepower APC, created by Israel’s Ministry of Defense Tank and APC Directorate, can move at speeds of up to 90 kilometers per hour (56 miles per hour), has exceptional all-terrain mobility, and can stay operational for days on end.
The Eitan incorporates cutting-edge technologies including the “Iron Fist” defense system, peripheral sensors with day and night vision, computerized front calculation and processing capabilities, and touch screens with processors.

“After Operation Protective Edge, the ‘Eitan project’ was initiated,” said Brig. Gen. Guy Paglin, Commander of the IDF Tank and APC Directorate. We completed development and began serial manufacture of the Eitan in dozens of sectors in Israel and abroad a few months ago, with assembly presently taking place here at the Merkava plant. The Eitan APC would ultimately be used in IDF combat units.”